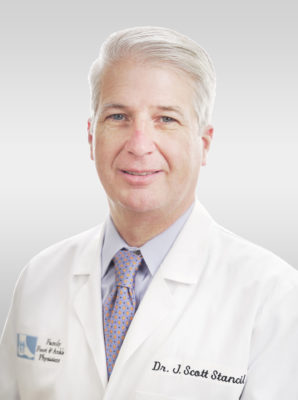 Dr. J. Scott Stancil is vastly experienced and knowledgeable in treating both medical and surgical pathologies of the lower extremities. He is a Diplomate of the American Board of Podiatric Surgery, American Board Certified for Wound Care, a Fellow of the American College of Foot and Ankle Surgeons, and a member, as well as, past Delegate for the American Podiatric Medical Society. He is a past President for the North Carolina Foot and Ankle Society. Recently, he was elected and appointed by the Governor to serve on the North Carolina Board of Podiatry Examiners. Dr. Stancil is heavily involved in limb salvage and treatment of diabetic lower extremity disorders, sports injuries as well as trauma. Contracted with the United States Naval Clinic at Marine Air Station Cherry Point for over 20 years, Dr. Stancil treats active duty servicemen, service women, retirees and their dependent families. Dr. Stancil received his undergraduate degree in Biology from the University of North Carolina at Chapel Hill, his Masters of Education from East Carolina University and earned his Doctorate of Medicine from Temple University School of Podiatric Medicine in 1996. He completed his general podiatric and surgical residency at the Sheehan Memorial Hospital in Buffalo, New York.

Dr. J. Scott Stancil, DPM
5.0
Based on 1 reviews
Write a review
He's a favorite Doc in my list of. I had bone spurs and a tendon reconstruction , years ago , and he took real great care of my needs and always answered my calls for concern. Over 15 years later I am back in his office and have brought along a family member as well .
Author Felicia N.
‹
›